This article originally appeared on the OUPblog on 26 October 2013: http://blog.oup.com/2013/10/metabolomic-markers-of-aging/

Aging is a complex process of accumulation of molecular, cellular, and organ damage, leading to loss of function and increased vulnerability to disease and death. Lifestyle choices such as smoking and physical fitness can hasten or delay the aging process. This has led to the search for molecular markers of age that can be used to predict, monitor, and provide insight into age-associated decline and disease.

Metabolomics is a novel technology that entails the simultaneous study of numerous low-molecular weight compounds, called metabolites. The aim is to profile all low-molecular weight metabolites that are present in biological samples. Metabolites represent intermediate and end products of metabolic pathways that rapidly reflect physiological dysfunctions and may mirror early stages of a pathological process.

We investigated the relationship between 280 metabolites and the age of a person. We screened blood samples given by 3000 pairs of twins (6000 individuals) aged between 17 and 85, and found that 22 of the 280 metabolites varied most with the age of donors. The graph below divides the twins into 5-year age groups showing that collectively, concentrations of the 22 gradually change with age, demonstrating the potential for telling age from a blood sample alone.

One metabolite, a sugar-loaded amino acid called C-glycosyltryptophan (C-glytrp), was of particular interest because levels of it in blood were markedly different in samples from younger and older sets of twins, but also, within given age groups it was higher among donors with high blood pressure, low bone mass, and low lung function. This suggests that this metabolite is related to physiological aging.

Further investigations revealed that there was also a link between C-glytrp levels and low birthweight. Birthweight is known to be developmental determinant of healthy aging. Low birthweight has been shown by many studies to increase risk of a host of problems in adulthood including obesity, diabetes, high blood pressure, and osteoporosis. In our study some pairs of identical twins had different levels of C-glytrp, and 10 per cent of this could be explained by unusually large differences in birth-weight between the two twins, despite their identical genetics. In fact, we find that most of the variation in C-glytrp (72%) is not genetically influenced.

Our findings also provide molecular mechanisms for the relationship between factors in the womb and infancy and aging in later life.  A chemical change in the DNA (methylation) at a gene called WDR85 was correlated with the metabolite related to aging and birthweight. This gene involved in protein translation has been shown in previous published studies to be important in both embryonic development and cell senescence in mice.

The fact that methylation (an epigenetic change) at the DNA that encodes this gene is correlated with C-glyTrp suggests that the link between weight at birth and aging may be related to molecular processes related to cellular senescence that are involved with protein translation. 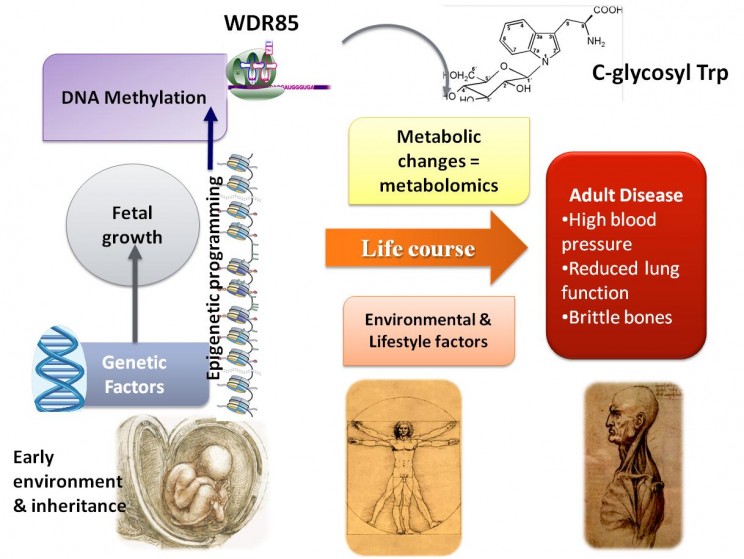 The aim of our future research is to build up the predictive potential for the panel as a whole by finding similar correlations with ill health for some of the other metabolites, but this will require considerably more research. We would like to better understand the molecular mechanisms that underlie C-glyTrp and investigate its role in other important aging traits such as inflammation, insulin resistance, and muscle strength.

New molecular technologies such as metabolomics are enabling detailed studies of the molecular changes that result in aging and are thus revealing information about biological pathways that change with age. In the near future it will become possible to tell from an individual’s “metabolomic profile” the extent of their biological aging, and whether it matches their calendar age or they may have a younger or older biological age. Continued research in this area will help in disease prevention and treatment for age-related diseases.

Image credits: (1) The graph is taken from the paper referenced in this post. (2) By the author.

Ana M Valdes received her M.A. and Ph.D. from the University of California at Berkeley where she specialized in Genetic Epidemiology. She is a Reader and Associated Professor at the University of Nottingham. Her research work is focused on deciphering the molecular mechanisms related to aging and in particular age-related diseases such as osteoarthritis and gout. She is one of the authors of the paper ‘Metabolomic markers reveal novel pathways of ageing and early development in human populations’ in the International Journal of Epidemiology.